Home » Pedestrian Killed in Hit and Run at Dangerous Intersection

Pedestrian Killed in Hit and Run at Dangerous Intersection 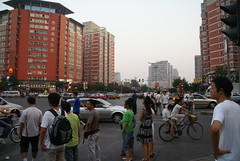 A pedestrian who was walking across the street on Saturday morning has been hit and killed in a hit-and-run accident. The accident happened at an intersection that has a long history of similar incidents. The accident happened around 5:40 a.m. near Bellaire and Gessner.  Police said the victim was attempting to cross Bellaire when the driver hit him and sped off. The victim was pronounced dead at the scene. Houston police say that investigators are checking evidence and surveillance video in an attempt to track down the driver responsible. A spokesperson for the HPD indicated that there have been at least two other deadly accidents along the same portion of Bellaire. Both of the other incidents were also caused when someone attempted to cross the street in the middle of the area under construction. One of the issues along this stretch of Bellaire is that 55 street lights were removed from one side of the street. When pedestrians try to cross the street, they are not visible to oncoming motorists. The situation is described by residents as being “very dangerous”. Construction on this portion of Bellaire is scheduled to be completed by October 2014. If you or a loved one have been the victim of a hit and run accident, call our offices as soon as possible. We can get your civil case started for you once you’ve seen a doctor. Our attorneys will take the time to sit down with you and discuss your case. Most importantly, we have years of experience in the Houston area and have successfully argued accident cases in the Texas courts. Call us now so that that you can get the compensation and peace of mind that you and your family deserve.