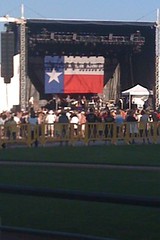 After three members of his band were hurt after their tour bus crashed, recording legend Willie Nelson, has announced that he will be suspending performances until December. According to the Texas Department of Public Safety, Nelson was not aboard in the weather-related accident around 3:30 a.m. CST Saturday on Interstate 30 near Sulphur Springs, 75 miles northeast of Dallas. Trooper Sylvia Jennings says seven people were on the westbound bus, including the driver who was dealing with wet roads and high winds.

Spokeswoman for Nelson, Elaine Schock, said in a statement that Paul English broke his ankle, his brother Billy English suffered a bruised hip, and Tom Harkin is suffering from either a cracked or bruised rib.

Accidents are a part of life. Unfortunately, in some accidents, people are injured. Any number of factors can contribute to a bus accident such as traffic, equipment failure, road conditions, driver inexperience, driver distraction, driving under the influence of alcohol or drugs and even medical conditions can be a contributing factor. In this particular case, however, the road itself was to blame. Even in that case, counties, states and even the federal government can be held liable if the road was poorly designed.

If you or a loved one has been involved in an accident, regardless of whether it was a bus or any other type of vehicle, give us a call. Our lawyers will sit down with you and go over the details of your case. We will then offer several courses of action in order to insure that you receive the just compensation that you deserve. We are here to help you. Your initial consultation is free.