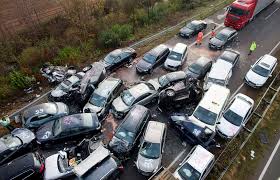 Friday night saw a string of accidents in Houston. Deputies from the Harris County Sheriff’s Office were investigating the death of a pedestrian who was struck and killed while trying to cross Dell Dale exit ramp. As a result of the investigation, traffic had begun backing up near the scene of the accident. While the deputies were examining the scene a second accident happened. A driver who was later arrested for DUI, struck several vehicles who had stopped in the westbound lane. At least five and potentially as many as seven vehicles were involved in the second accident, including an eighteen wheeler, according to deputies. If you or a family member has ever been injured in an accident or on the job, we can help you get the settlement you deserve. Our attorneys are specialists in personal injury law and have years of experience both in and out of the courtroom. It is our goal to provide you with the legal advice and representation that you need in order to resolve your claim as quickly as possible and in a manner that benefits you. Contact us by phone or online. Call today.