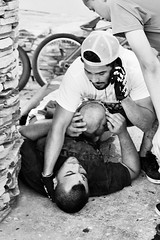 Kaitlan Bell ended up getting hurt when she bumped heads with another girl while they were playing on a swing set during a field trip. On returning to school, Kaitlan said she was in a lot of pain and felt dizzy and confused. She went to the school nurse and told her what happened. The nurse gave her some medicine and sent her back to class.

When Kaitlan got home that evening, her symptoms had worsened enough for her father, Corey Bell, to take his daughter to the emergency room.

Doctors at the hospital said that Kaitlan had suffered a severe concussion. The injury was severe enough that she remained at home for several days after being treated. Bell is angry because his daughter says that even though she informed teachers of her injuries, they brushed it off.

School officials stated that it is official policy for the nurse to notify parents when a child complains of having been hurt, however the regular nurse on school staff was gone that day.

The official released a statement that read in part:

“Unfortunately, the assistant did not notify the parents per standard practice. This matter is being handled as a disciplinary issue, and the school has taken measures to ensure this doesn’t happen again.”

Corey Bell, however, doesn’t believe that it should ever have happened.

For parents, it is hard enough to let their children go too far out of their sight. School districts have the responsibility to safeguard all students that are in their care during the class day, even when they are on field trips. A school is duty-bound to provide a secure environment and appropriate adult supervision and safety. Most schools do this very well. However, in a situation such as this when a staff member has been negligent, parents would be wise to seek the advice of a personal injury attorney.

Consulting with a qualified, dedicated and experienced personal injury attorney as soon as possible can make all the difference in the world. You need someone on your side that will fight for you and your child’s rights. Call for your free consultation and legal analysis today.