Horse-Drawn Carriage Goes Out of Control After Pet Spooks Horse 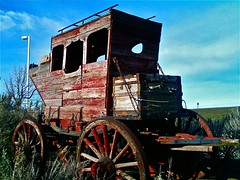 A runaway horse-drawn carriage has left the driver, two passengers and the horse injured when it crashed into a picket fence in the historic district of southeast Galveston.

No one involved in the incident, including the driver and passengers Richard Cote and his wife Michelle Cote from Ottawa, Canada, suffered life-threatening injuries. The incident occurred at approximately 11:45 a.m. at 17th and Winnie streets.

The carriage was being driven by a female driver for Seahorse Carriages whose name has not been released. It is unclear what actually caused the crash, however, the Galveston County Daily News reported on Monday that the driver had her dog along and the pet leaped from the carriage. The driver then jumped out after the dog and was unable to clear the wheel of the carriage, getting run over in the process.

Eyewitnesses say that the horse began to gallop down the street while he was still harnessed to the carriage. The two Canadian passengers were still inside of the runaway carriage. One of the passengers, Michelle Cote, jumped out of the carriage, while Richard Cote attempted to grab the reins, but was unable to do so before the horse ran off of the street and through a picket fence.

There is still some dispute between the driver and the passengers as to what actually happened. The incident is still currently under investigation. The conditions of either the horse or the dog are not known.

Horse drawn carriages remain to be popular tourist attractions for those who want to experience a feel of the past in historical areas. The nature of horses, however, is that they can sometimes be unpredictable. In some major metropolitan areas, such as New York and Philadelphia for example, there is considerable debate as to whether these attractions should continue to be allowed because of the health risks to the public and to the animals involved in these operations.

If you or a loved one has been injured in an accident involving a horse drawn carriage or any other kind of accident, give us a call. Even in the event of your having signed a liability waiver before your ride, you could potentially bring suit or legal action for medical costs, negligence, or any other related damages. We have years of experience in the Houston courts representing personal injury and accident claims. Call us to meet with one of our attorneys. We are here to protect your legal rights.