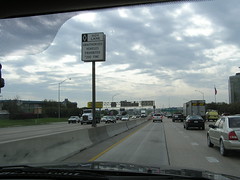 A pedestrian has been struck and killed in the North Freeway HOV early Tuesday by an off-duty Harris County Sheriff’s deputy. Houston TranStar released a report shortly after 5:30 a.m. when the accident occurred near Airtex Boulevard. The deputy, who was driving a white Honda coupe at the time of the incident, struck a pedestrian who was walking in the HOV. The pedestrian did not appear to have gotten out of any nearby vehicles. Life Flight was called in, but the pedestrian was pronounced dead before they could arrive. Why the pedestrian was walking on the HOV is unknown. Initially, all inbound traffic on the HOV was forced off at Rankin, and traffic in the mainlanes was slow in both directions due to the emergency response. The investigation later closed the HOV during rush hour causing delays during the peak of the morning commute. The roadway reopened at around 8:00 a.m. Freeways and highways have very fast moving traffic. Even if a motorist is stranded or in the case of an emergency, it is extremely dangerous for pedestrians to walk on freeways.  It is also considered illegal in the state of Texas for pedestrians to be on those types of high-speed motorways. If you or a loved one have been involved in an auto-pedestrian accident, having an experienced attorney on your side is important. Determining liability is an essential element of successfully handling any personal injury claim. Our attorneys have years of experience in the Houston courts with accidents and freeway collisions. Even in the best of scenarios, recovery from an accident can be both lengthy and expensive. With the high price of medical expenses, time off of work, damages, pain and suffering, these costs can mount up quickly. Give our offices a call for your free initial consultation. We will match you with an attorney that will take the time to discuss the details of your specific case and can offer suggestions on how to best proceed. You have rights and we can help. Call us today.