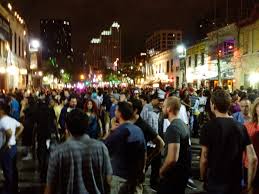 Rashad Charjuan Owens, like so many who perform at the South By Southwest music festival, had hopes of making it into the big time. Instead he drove a car into the packed crowds of music fans on the streets of Austin Friday night. In the midst of attempting to flee  a routine traffic stop, Owens drove his borrowed Honda into the crowds thronging the streets and continued to drive for nearly three city blocks without ever hitting the breaks according to the dash cam video released from one of the cruisers at the scene. At no time were brake lights evident, even as victims were flung into the air by the speeding vehicle. Two victims are dead and twenty-two injured with at least seven still hospitalized.

Violence can explode unpredictably and sometimes innocent bystanders get caught up in the outbreak through no fault of their own. Incidents like that can cause serious, sometimes, lifelong injury or even death. In such incidents, as in all cases of personal injury, workers comp or wrongful death, it is always in the best interests of an injured person to obtain legal counsel, to help make certain their interests are looked after. If you have been injured or a loved one killed, please give us a call. Our professionals are here to help and want to hear your case. Call today.