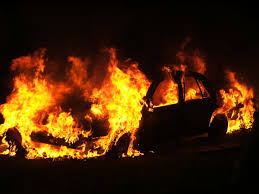 No one sets out to be in an accident. Any time you or a loved one gets behind the wheel, the potential for a crash that can cause serious injuries or even the tragedy of death, is always present. Even if you take every precaution possible by wearing a seatbelt, avoiding the dangers as much as possible, the unexpected can happen.

This is precisely what happened in an accident involving five cars ended in a fiery crash that left one person dead and three others injured. In the in the early morning hours just north of the Bush Intercontinental Airport at the intersection of FM 1960 and Farrell Road, Harris County deputy constables in Precinct 4 responded to the crash scene. They arrived on the scene to find that one car was overturned while a second vehicle was engulfed in flames. One woman, who had been inside the burning car died at the scene of the crash, while three other people were taken to area hospitals to be treated for injuries. The conditions of those injured have not been released.

Investigators stated that all of the vehicles involved in the crash had been traveling westbound on FM 1960 when one sedan hit one of the other vehicles, and resulted in a chain reaction.

If you or a loved one has been in a serious car accident and has been injured, having a good accident and personal injury attorney on your side is something you don’t want to be without. Call us and find out how we can help you in your specific case.