Mother Believes School Didn’t Do Enough to Help her Child 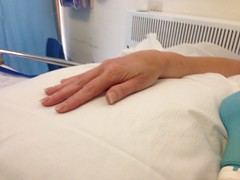 A Fisher Elementary first grader is recovering from a broken wrist after a playground accident. Six-year-old Herminia Castillo was playing with her classmates when she fell off the monkey bars. The child’s mother believes that the school did not do enough for her daughter soon enough. The school let Herminia’s mother, Rosalinda Garcia view the surveillance video of the playground on that day. “She landed really, really hard on the floor,’ said Herminia’s mom. In viewing that video footage Garcia noticed that it was actually other students who helped Herminia by taking her to the adults who were supposed to be supervising. “Not one of the teachers had gone to go and check on her or see if she was okay.” Garcia feels strongly that the teachers were not supervising her daughter and the other children properly and that they simply did not respond to her daughter in an acceptable amount of time. The Pasadena ISD declined to release the video. However, District officials were forthcoming with reporters in admitting that another child had been hurt moments before Herminia had been hurt. The District claims that Herminia’s injuries did not appear serious and so they took the two injured students in order. Herminia eventually was taken to the school nurse where ice and water were administered on the wrist as first aid. Herminia’s mother was notified of her daughter’s injuries an hour later. Garcia took Herminia to the emergency room where it was determined that the child had a fractured wrist. Garcia is set to meet with District officials next week and discuss retraining staff to be more alert to such emergencies where students are involved. The Pasadena ISD released a statement to local news channel, KHOU: We regret that this first grade student got hurt playing on the playground during recess. Teachers on the playground and the campus R.N. responded quickly and appropriately to this child’s injury. The supervising teacher who responded to the injured student got to her within 35 seconds. It’s difficult enough when you entrust your child to the care of other. It can be a traumatic experience if your child is hurt when they are at school. Every year, and across the country kids are hurt in accidents that happen at school. These accidents include those that happen to and from school as well as during recess, intramural or other classroom activities. School districts have the responsibility to safeguard all students that are in their care during the school day. A school has a duty that is sacred to both the community, the children they instruct and to their families and loved ones to provide a secure environment. Most schools do this every day and they do it very well. However, in spite of all of this, there can arise situations where students have suffered serious injuries because of accidents. These are not always because of negligence on the part of schools or their administrative and teaching staff. In such a situation, parents may seek the advice of a personal injury attorney. If your child has been injured in an incident or accident at school, you and your child could be entitled to compensation. Give our offices a call and speak to one of our experienced lawyers.