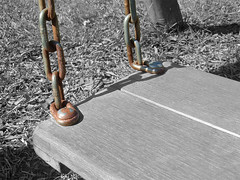 An open trench in a residential neighborhood near an elementary school has created a hazard for kids according to area residents and parents.  The trench on Whittington drive near Ashford Elementary is a gaping hole that measures approximately four feet deep and 15 feet long. Area residents believe that it is just too dangerous on a sidewalk that is frequented by many school children on their way to and from classes every week day. Neighbor Tristan Riekhoff was especially concerned because it was near Halloween. “With all the rain last night, it was flooded to the top. It looked like a big puddle. Anybody could just hop in there. Full of water, somebody could drown.” Rieckhoff said he began calling the city at 8:00 a.m. and got nowhere. Taking matters into his own hands, he bought some caution tape at a nearby Lowe’s and attempted to block off the area himself. He got a response from a city worker later in that afternoon who told Rieckhoff that a work order would be put in. When contacted by local news station, KHOU, the city of Houston gave a much different response. Spokesman Alvin Wright said the city was “shocked” and called the unsupervised trench outside of Ashford Elementary “unacceptable”. A public works crew responded about an hour later, and a dump truck quickly filled the trench with dirt. According to official accounts, a city work crew had initially dug the trench in order to fix a water main break. City spokesman Alvin Wright said this is not common practice, and the city will be launching an investigation into the incident. Construction sites can create what is known as an “attractive nuisance”. Children naturally want to climb, explore and get themselves into places that can be dangerous. The risks that kids take are often far and beyond what most adults and common sense would allow. Tragic accidents can happen because proper precautions were not taken. If you or a loved one has been hurt in an accident or suffered a personal injury due to the neglectful acts of others, give our offices a call. We will take the time to consult with you about your personal injury law suit and offer suggestions on how to proceed. Injuries often will have medical costs and even ongoing therapy attached to them. Those expenses can mount up quickly and can become overwhelming. We have years of experience successfully representing our clients in the Houston area. Your initial consultation with one of our legal representatives is free and without any obligation.