Home » Man Run Over by Train Lives to Tell the Tale

Man Run Over by Train Lives to Tell the Tale 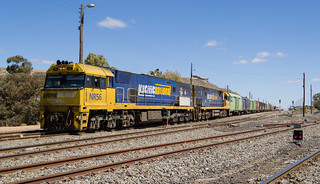 A San Antonio man has been run over by a train and has lived to tell the tale. The accident happened on Monday morning near Frio City Road and Brady Boulevard. Officials from the San Antonio Police Department say that the crew of a Union Pacific train was travelling at a slow speed at the time of the accident. Still, engineers were unable to stop the train in time to avoid running over the man who was lying vertically on the train tracks. When the train was able to stop, a 44-year-old man was discovered lying between the train’s engine and first car. Because the man was found lying vertically on the train track, investigators say that this position may have been the reason why this man survived the incident. Police officers indicated that the man smelled of alcohol. However, they are uncertain as to whether the man had intentionally laid down on the train tracks. San Antonio Police said in a statement that the man could possibly be facing a charge of criminal trespass. The victim was taken to University Hospital with a minor cut on his head and bruising to his side. Train accident cases can be extremely complicated. When a train accident occurs, no matter who might be at fault, accident victims may have to deal with several different corporations or government agencies in an effort to get their personal injury case settled. Each corporation or government entity will likely have a lawyer or even several lawyers working on their behalf. In almost every case, their goal is to reduce the amount of money that needs to be paid to settle any given claim. Every year, there are about 3,000 train accidents that result in about 1,000 deaths in the United States. Even a “minor” incident with a train can serious injuries and even death. Trains are massive in size and weight and more often than not, cars or even pedestrians don’t have a chance against such large, fast moving objects. Train accidents can be caused by a number of factors including:

Related: Woman Survives Being Struck by a Train Twice

Sometimes trains can be derailing and those who are innocent bystanders or are even some distance away from a train accident can be affected. Pedestrians and bystanders can slip and fall under trains and potentially be crushed. No matter the kind of train accident, victims need a good attorney on their side. If you or a loved one has been injured in a train accident of any sort, give our offices a call. Our experienced personal injury and accident lawyers will meet with you and discuss the details of your case. Medical expenses, loss of work, rehabilitative care and pain and suffering can all be a part of your personal injury lawsuit. We have years of experience in the Texas courts successfully representing the interests of our clients. Call us today. There is no cost or obligation to you and your initial consultation is completely confidential.